The marriage of Miss Annie L. Cocker, daughter of Mr John Cocker, to Mr Malcolm S. Moore, was celebrated at the residence of her parents' -by Rev. J. C. Freeman oh Wednesday, before a large assembly of relatives and friends. The bride wore a pretty gown of grey, trimmed with silk, lace, and insertion, and carried a shower bouquet of lovely white flowers and ferns. The bridesmaids were Misses Amy Cocker and Flossie Jago. They were dressed in frocks of blue and cream, and wore the bridegroom's gift of greenstone brooches, set in gold, and carrying floral baskets. Mr A. E. Cocker acted as best man. The ceremony was held on the verandah, and after the usual formalities were signed, the company sat down to the breakfast in a large marquee adjoining the house. After the banquet, toasts appropriate to the occasion were proposed. Mr and Mrs Moore subsequently left for Victoria on their honeymoon. 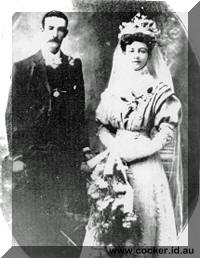 Annie and Malcolm had five children:

Theresa next married Michael Anderson.  They had one son: Rory Caelen.

6-Stuart Leslie Husband was born about 1973.

6-Robert Leslie Husband was born about 1980.