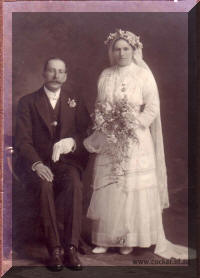 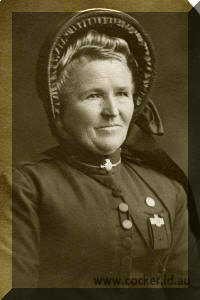 North-Eastern Advertiser Tuesday 12 December 1944, page 3
Obituary MR. ALFRED ERNEST COCKER
(From Our Own Correspondent)
There was a representative gathering at the funeral of the late Mr. Alfred Ernest Cocker which took place at the Ringarooma cemetery on December 3rd. It was preceded by
a service at Christ Church, Ringarooma. The Rev. A. France conducted services at the Church and graveside. The late Mr. Cocker who died at his home, after a long illness, resided in the district for the past twenty years. He was a well respected citizen and a ready helper at all times.
He was the son of the late Joseph and Emma Cocker and was born at Perth,Tasmania. He leaves a widow and five children, one daughter having predeceased him. Among the many floral tributes were tokens from the Church of England Guild, members or the Country Women's Association, Ringarooma Bush Nursing Centre.
The chief mourners were: Mrs. E. Cocker (widow), Elsie (Mrs. Maloney), Thelma and Mabel (daughters), Noel (son) and George (brother). The casket bearers were six members of the Church or England, Messrs H. C .Haines, G. Bird, R. and W. Andrews. J. Wardlaw and A. France. Attendants were Messrs B. W. Robinson and R. Wardlaw.

They had six children:

4-Elsie Caroline Cocker was born on 30 Nov 1915 in Wellington, New Zealand, was christened on 30 Nov 1916 in Church of England, and died on 10 Sep 2006 in Royal Hobart Hospital at age 90. Elsie married Cyril Vincent Maloney, son of E. A. Maloney and Unknown.

At St. Stephen's Church of England, Richmond, Victoria, on Saturday last the wedding was quietly celebrated of Elsie Caroline, eldest daughter of Mr. and Mrs. E. Cocker, Ringarooma, and Cyril Vincent, fourth son of Mr. and Mrs. E. A. Maloney, of Horsham, Victoria. The bride, who entered the church with Mrs. Hudson, was unattended, and Rev. J. Hudson, vicar of St. Stephen's, officiated. The bride's frock was of white satin, cut on simple lines and buttoned at the back from the neck to the waist. The skirt, which was flared, ended in a slight train and her veil was held in place by a halo of orange blossom, which was used at her mother's wedding. She carried a bouquet of white jonquils and fern tied with white satin ribbon. The bridegroom was supported by Mr. Gilbert. The future home of Mr. and Mrs. Maloney will be at Parkville, Melbourne.

They had two children: Alfred Edward (Fred) and Elsie Jean.

5-Alfred Edward (Fred) Maloney was born on 29 May 1943 in Heidelberg, Victoria. Alfred married Elizabeth Watchhorn on 21 Mar 1968. Elizabeth was born on 10 Dec 1946 in Hobart, Tasmania. They had two children: Nicole Rae and Brett.

5-Elsie Jean Maloney was born on 8 Sep 1944 in Heidelberg, Victoria.

7-Samantha Juanita McNamara was born on 14 Jan 1994 in Launceston.

6-Veronica Annette Green was born on 23 May 1968 in Queen Victoria Maternity Hospital, Launceston. Veronica married Kerry Brian Wood on 6 May 1989 in Christ Church, Longford, Tasmania. Kerry was born on 20 Apr 1968. They had two children: Lachlan James and Cameron Andrew.

Veronica next married Vincent Zupan. Vincent was born in 1964. They had two children: Jacob and Louisa Jane.

6-Michael David Kenneth Green was born on 16 Aug 1969 in Launceston.

6-Phillippa Rosemary Green was born on 10 Jul 1975. Phillippa married Keith Wilson on 30 Oct 2004.  They had one daughter: Kayla Lillian.

Elsie next married Ronald Arthur Dennis, son of Arthur Walter Dennis and Florrie Alberta Hallam, on 17 Apr 1950. Ronald was born on 10 Feb 1909 in Queen Alexandra Hospital, Battery Point, Tasmania and died on 3 Aug 1987 at age 78. They had one son: Graeme Ronald.

4-Thelma Daphne Cocker was born on 14 Apr 1920 in Scottsdale and died on 27 Jul 1998 in Carr Villa Rose Garden at age 78. Thelma married William Lumley in 1969 in Uniting Church Paterson Street, Launceston, Tasmania. William died in 1976. They had one daughter: Barbara May.

5-Barbara May Lumley was born on 18 Sep 1942. Barbara married Harold Lazarus. They had two children: Andrew William and Karen Louise.

Barbara next married Geoffrey Stingel.  They had one daughter: Rebecca.

6-Rebecca Stingel was born on 6 Feb 1976 in Papua New Guinea. Rebecca married Shane Moore on 2 May 2009. Shane was born 19 Mar ?. They had two children: Declan Thomas and Katherine Jane.

4-Colin Cedric Joseph Cocker was born on 13 Jul 1921 in Scottsdale and died on 31 Jul 1999 in the Launceston General Hospital at age 78. Colin married Linda May Cope, daughter of Harold Cope and Ethel Fitcher, on 1 Oct 1949 in Melbourne, Victoria. Linda was born on 17 Jun 1918 in North Fitzroy, Victoria, died on 15 Nov 2011 in Baptist Care Nursing Home, Compton Downs, Tasmania at age 93, and was buried in Scottsdale Cemetery. They had three children: Colin Desmond, Evan John and Denise Meredith.

5-Evan John Cocker was born on 26 Aug 1952 in Scottsdale. Evan married Elaine Judith Thompson-Tulloch on 25 Mar 1972 in St Mark on the Hill, Church of England, Launceston, Tasmania. Elaine was born on 23 Jul 1948 in Launceston. They had two children: David Evan John and Heath Irwin Cedric.

6-Heath Irwin Cedric Cocker was born on 27 May 1975 in Queen Victoria Maternity Hospital, Launceston and was christened in 1975 in St Paul's Anglican Church, Derby, Tasmania. Heath had a relationship with Private. They had a daughter.

4-Mabel Joyce Cocker was born on 12 Dec 1926, died on 22 May 2004 in Bayswater Victoria at age 77, and was buried on 29 May 2004 in Springvale Cemetery, Victoria. Mabel married Ian Beaton. Ian was born on 23 Sep in Melbourne, Victoria, died on 21 Feb 1971 in Bayswater Victoria, and was buried in Springvale Cemetery, Victoria. They had six children: Andrew, Ashley, David, Loraine, William Lawrence (Billy) and Elizabeth.

5-Ashley Beaton was born on 27 Mar. Ashley married Meredith.  They had two children: Heidi and Heather.

5-Elizabeth Beaton was born on 1 Sep 1963 in Melbourne, Victoria.

4-Jean Lorraine Cocker was born on 3 Apr 1928 in Scottsdale, died on 15 Nov 1942 in the Launceston General Hospital at age 14, and was buried in Ringarooma.

COCKER.-The funeral of the late Jean Lorraine Cocker is appointed t leave Christ Church, Ringarooma, on Tuesday afternoon, November 17, the conclusion of a service, which will commence at 2 o'clock. Interment will take place in the Ringarooma Cemetery. Friends are invited to attend. - ARMITAGE , ARMITAGE, A.F.D.A., 116 St. John street, Launceston.