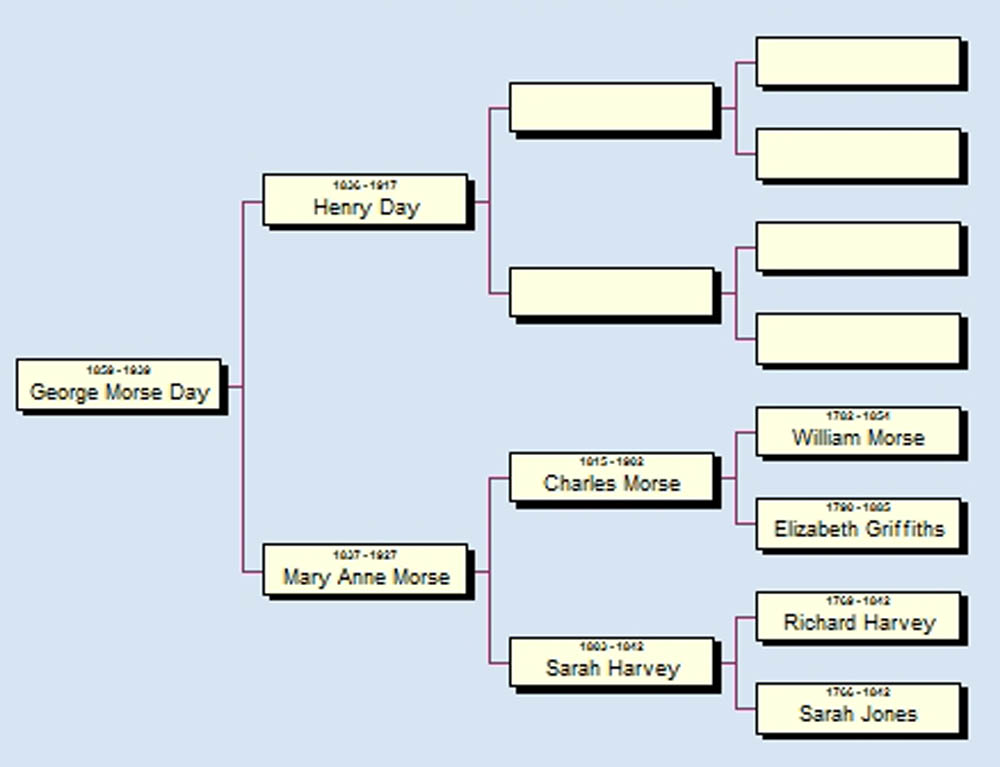 Henry Day was born in Clevedon on the coast of Somerset near Bristol, England, in 1836. He arrived in Tasmania aboard the Ocean Chief in March 1855, and moved to Deloraine. In the Anglican Church there on 21 June 1858, He married Mary Morse, daughter of Charles Morse and Sarah Harvey. She was born in 1837 in Purington, Somerset, and came with her father to Tasmania, aboard the Commodore Perry, arriving in Launceston in April 1855. Henry Day had no schooling and could neither read nor write.

When first married they lived on a 10 hectare block at Deloraine owned by William Eastley, but later moved to a 20 hectare property at Paddy's Scrub where Charles Morse resided. In 1870 they bought a property in Paradise beside the Dasher River. During 1884 and 1885 he contracted to improve the Sheffield to Harrington main road down to the new River Don Trading Co. store and tramline at Lower Harrington. They ultimately bought a property and erected a home known as "Mt. Pleasant" along Day's Road, which branches westward from the West Kentish road about 2 km from Sheffield. For a time he was on the Kentish Plains Road Trust. In 1900 Henry and Mary Day returned to England for a visit and met four brothers he had not seen for 45 years. In June 1908 they celebrated their golden wedding anniversary with over a hundred guests.

The three Morse Bros, Charles (born 1814), James (born in 1821), and Edwin (born 1826) came from the small village of Puriton, near Bridgewater, Somersetshire in the south west corner of of England.  James was the first to come to Van Diemen's land as a young single man of 18, followed many years later by Charles and Edwin with their families. Despite the hardship of those days all three brothers attained a good old age before they died, Charles being 88, James 85, and Edward 81.

James Morse migrated to Tasmania in 1838 in company with and as a young employee of Lieutenant Colonel Alfred Harrop and George Baker. He was a young man of splendid physique, over 6 feet in height and built in proportion.  The trio lived at Port Sorell for 12 months, following close on the heels of the very first settlers to this lonely northern outpost. Then the partnership dissolved. Alfred Harrop went into the wool broker business became Mayor of Launceston six times. George Baker bought the property Springlawn opposite Port Sorell where the historian James Fenton then lived before going to Perth.  James Morse went to Deloraine where, in 1839, there were just a few scattered houses and a convict barracks. He started farming on a portion of the "Calstock" estate and soon became a large property owner and member of Deloraine Road Trust. He owned numerous houses, including the local brewery in Goderick Street and was a prominent figure at race meetings.

On 14 January 1855 Charles Morse (his wife having died) and three teenage children, Mary (17), Lottie (15), and George (13), together with Edwin and Jane Morse, with two children, James (3) and William (1), sailed aboard the Commodore Perry and arrived in Launceston in April 1855. They proceeded to Deloraine to join their brother James.

Charles Morse settled at Paddy's Scrub near the present golf links, on a farm owned by A. F. Rooke, brother to Colonel Rooke after whom Rooke Street, Devonport, is named. His daughter, Mary Morse, married Henry Day on 21st June 1858, and they later moved to Paradise. Lottie married Harry Jordan, of Deloraine. George married Louie Thomas, whose father later became licensee of the old Family and Commercial Inn, now a folk museum in Deloraine. George and Louie Morse had one daughter, also Louie, the mother dying shortly after the baby was born. This child later married Alf Richardson. George Morse later married Amelia Spicer, daughter of John Spicer of the Elizabeth Town Hotel.

In about 1866 the Edwin Morses, George Morse, Henry Day and their families bought land in Kentish and Paradise. Edwin and Jane Morse took up land about 3 km along Day's Road, that branches westward from the West Kentish road.

4-George Morse Day was born on 30 Apr 1859 in Deloraine, Tasmania and died on 24 Dec 1939 at age 80. George married Jane Evangeline Cocker, daughter of John Cocker and Sarah Elizabeth Briggs, on 26 Jun 1892 in Home of John Cocker, Barrington, Tasmania. Jane was born on 22 Oct 1870 in Westbury, Tasmania, was christened on 26 Mar 1871 in Mersey Circuit, Latrobe, and died on 14 Mar 1898 at age 27.  Another name for Jane was Eva. They had three children: Albert George, Henry Benjamin and Mildred Alice.

George next married Mary Carey in 1929.

3-Charlotte Harvey Morse was born on 15 Apr 1839 in Shapwick, Somerset, England and died on 23 Jan 1928 in Ophir, Deloraine at age 88. Another name for Charlotte was Lottie. Charlotte married Henry Jordan, son of John Jordan and Frances Fanny Quinn, on 14 May 1867 in Holy Trinity Church, Launceston, Tasmania. Henry was born on 15 May 1841 in White Hills, Tasmania and died on 5 May 1915 in Quamby Brook at age 73.

5-Frank Morse was born on 30 Jul 1919 in Sheffield and died on 25 Jul 1987 at age 67. Frank married Dorothy Richardson, daughter of Victor Richardson and Emily Florence (Queenie) Southernwood. Dorothy was born on 10 Feb 1925. They had three children: Miriam, Heather and Kevin.

7-Julian Robinson was born on 24 Jul.

6-Heather Morse was born on 9 Sep 1953. Heather married Dale Barnes. Dale was born on 11 Jun 1951. They had three children: Anthony, Christine and Katie.

George next married Louisa Amelia Thomas, daughter of convict ↑John Thomas and Charlotte Hughes, on 15 May 1873 in St Marks Church of England, Deloraine. Louisa was born on 2 May 1845 in Longford, Tasmania, died on 4 Apr 1874 in Paddy's Scrub, Osmaston at age 28, and was buried in 1874 in General Cemetery, Deloraine, Tasmania. They had one daughter: Louisa Charlotte Thomas.

4-Louisa Charlotte Thomas Morse was born on 27 Mar 1874 in Deloraine, Tasmania and died on 7 Jul 1948 in Chudleigh, Tasmania at age 74. Louisa, aged 18, had an illegitimate  son in Launceston on 22 June 1892.  Hervey Ira Morse was adopted by her grandfather, Charles and his third wife Ellen. Louisa married Alfred John Richardson, son of Isaac Simeon Richardson and Mary Ann Walker, on 19 May 1897 in Calstock (home of Charles Morse), Deloraine, Tasmania. Alfred was born on 20 Mar 1872 in Westbury, Tasmania, died on 10 Apr 1937 in Chudleigh, Tasmania at age 65, and was buried in Apr 1937 in General Cemetery, Deloraine, Tasmania. They had six children: Harold Isaac George, Leila Effie May, Ella Louisa Mary, Arnold Alfred Charles, Ethel Amelia Ellen and Raymond Vernon Irra. Their story is told here in the Walker family history.

Charles next married Ellen Emma Bird, daughter of convicts ↑James Bird and ↑Ann Rickett, on 31 Dec 1874 in Deloraine, Tasmania. Ellen was born on 16 Apr 1850 in Launceston and died on 23 Dec 1924 in Karoola at age 74. They had three children: Hervey Ira (adopted see above)  Charles James and James Charles.

3-Hervey Ira Morse† was born on 22 June 1892 in Launceston. He served in the First World War in the 3rd Light Horse Regiment, C Squadron.  He died of wounds on 26 Feb 1917  and was buried at Bazentin-Le-Petit Military Cemetery (Row G, Grave No. 23), France. 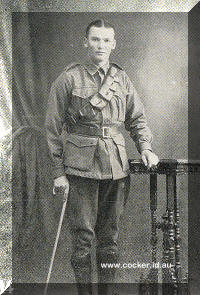 3-James Charles Morse was born on 19 Feb 1876 in Deloraine, Tasmania and died in 1945 at age 69. James married Ellen Margaret Donnelly on 17 Jan 1905 in Latrobe, Tasmania.  They had three children: Nellie Paula, James John and Jeanette Mary.

4-James John Morse was born on 2 May 1916 in West Devonport, Tasmania.

2-Edwin Morse was born on 6 Aug 1826 and died on 4 Jun 1907 in Sheffield, Tasmania at age 80. Edwin married Jane Hucker. Jane was born in 1832 in Bridgwater, Somerset, England and died on 4 May 1901 in Sheffield, Tasmania at age 69. They had eight children: James Hucker, William Ernest, Edwin, Elizabeth Jane, Amelia, Eliza, Louise Linda and George Albert.

3-James Hucker Morse was born in Jun 1852 in Somerset, England and died in 1912 in Port Frederick at age 60. James married Isabella Charleston, daughter of John Charleston and Isabella Scott Braid, on 15 Feb 1877 in Port Sorell. Isabella was born in 1855 in Scotland and died on 7 Jun 1935 in Devonport at age 80.

5-William George Morse was born on 17 Jan 1914 in Sheffield, Tasmania.

3-Elizabeth Jane Morse was born on 3 May 1858 in Deloraine, Tasmania.

3-Louise Linda Morse was born on 5 Jun 1864 in Deloraine, Tasmania.

William next married Sarah Durston on 1 Nov 1807 in St Michael and All Angels, Puriton, Somerset.